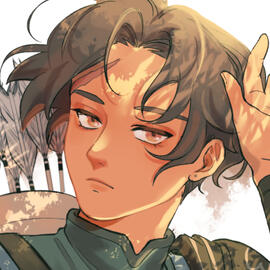 The Wind Beneath Me:
A Cyril Zine

The Wind Beneath Me is a physical charity zine focused on Cyril from Fire Emblem: Three Houses.

This will be a SFW zine that will feature general and shipping content of Cyril both pre- and post-timeskip.

The proceeds for The Wind Beneath Me will be donated to Defense for Children International Palestine.

General Requirements:
At least one of your pitches should be a solo Cyril piece with no ships, but the other two may include romantic ships or gen/platonic relations if desired.Portfolio links may be in the form of a Google Drive folder, a curated website, an AO3 account for writers, and so forth—but please avoid linking your full social media. All samples must be SFW.Must be 16 years old or older by the time applications close (Nov 19).Must have a Discord account, as this is where all discussion and collaboration will occur.Must be willing to work with others. This is a collaborative project, and we would like everyone to get along to ensure this project feels fun and worthwhile for all involved.Because this zine is intended to be a safe space for creators and contributors, anyone in support of racism, colorism, homophobia, transphobia, xenophobia, or complacency with and acceptance of ships involving taboo content such as the following: incest, non-con, and pedophilia will not be allowed.
Note: All applications will be made anonymous to the team of reviewers.

For the zine, we ask the following things of contributors:

This schedule is subject to change based on the needs of the moderator team and the contributors.

Bushra is an illustrator and writer. They center their creative works around leftism, diasporic experiences, and found family. They have prior zine experience as the art moderator for Beyond the Horizon: a FE3H POC Zine.

Cyril, along with Khalid, is Bushra’s all-time favorite Fire Emblem character. For them, he represents growth and tenacity in the face of tragedy. A headcanon Bushra has of Cyril is that he makes sure to start his day with a cup of masala chaa. It’s a quiet moment of peace he holds for himself in the morning before he plunges into the chaos again.

Mod Grey (VeloxVoid) has been writing Fire Emblem works since December 2019, contributing to the fandom frequently in zines, weeks, and big bang events. They have experience as a mod in 4 Fire Emblem fanzines, and thus are very excited to get to work on The Wind Beneath Me!

Cyril is Grey’s favourite Three Houses character, loving him since the original character reveals! Grey’s favourite Cyril headcanon is that he finds it comforting to be very warm when he sleeps, including sleeping in a big oversized sweater with a hot water bottle and wyvern plushie!

Rai is a writer and artist who has loved Fire Emblem since a young age and has written many works spanning multiple titles throughout the years. They value mental health and disability awareness, often exploring said themes in their writing.

Finding Cyril's character to be complex and interesting on many levels, he is not only Rai's favorite character but something very important to them as well. They headcanon Cyril to be artistically inclined, a sketchbook being one of his few personal belongings that he practices in during rare moments of leisure.

Maru is an Illustrator and designer who loves to draw cute characters with engaging stories and vibrant aesthetics. She is also a small shop owner who sells cute merch of her original characters and select Pokémon.

Maru’s headcanon for Cyril is that he probably enjoys learning languages on the side. He finds interest in connecting and understanding people, and probably the challenge of it as well. He probably prefers speaking to wyverns though, they are a little less aggravating sometimes.

Devin has six years of experience shipping online orders through their wife’s store. They were shipping mod for Cavalier: a Sylgrid zine, and A New Bloom: a Dedue zine. In their spare time they’re a writer, an artist, and a fates stan.

Devin’s favorite headcanon for Cyril is he has a difficult time accepting gifts, and not wanting to appear ungrateful he decorates his wyvern with them. His classmates catch on and start gifting him things like flower crowns. Nobody’s wyvern is as pretty as his.

SnailRoyal is forever shackled to the whims of their hubris, and so their work is never finished. While this will be their first experience as a Graphics mod for a zine, they do have prior experience as the graphics & publicity head for various organizations, as well as a contributing artist to other zine projects like: Fódlan Cuizine, Beyond the Horizon, and PinOP Calendar.

SnailRoyal’s favorite Cyril headcanon is that he raised his wyvern from an egg! When it hatched, it would follow him around the campus as he did his duties. After the timeskip, he is seen to have the strongest bond with a wyvern and can decimate a whole battlefield together.

Is this zine for-profit or for charity?

This zine is for charity. The organization will be announced as the project continues. All zine profits will go to this organization.

Will this zine be physical or digital?

The zine will be physical.

Is this zine safe for work?

Yes, this zine will not contain any NSFW content.

Can I apply for more than one role (ex. both artist and writer)?

You may apply to more than one position, but you will only be accepted into one position for one zine.

How will contributors be compensated?

All contributors will receive a print copy of the zine, and if funds permit, will receive the full bundle (with merch).

Will shipping characters be allowed in this zine?

Yes, although we would prefer solo or gen/platonic pieces, we will allow romantic shipping. All pieces involving ships must center Cyril in the work. Only Cyril/student ships are permitted.

Will alternate universes (AUs) be allowed in this zine?

Yes! We love AUs and would love to see what ideas you have.